For almost ten (10) years in the digital writing industry, I’ve written dozens of published articles and collected a voluminous amount of material I’m more than willing to share with you for free. If interested, sign up below, and be the first to know when a new title is up.

Here’s chapter 1 of the new book I’ve been writing since NaNoWriMo 2022. Enjoy reading. Let me know your thoughts in the comment section below.

Being a doctor is playing god in white gowns—an oath Clay knew best, though years had passed since his first day at work. Although he has less than ten years of working experience, with hundreds of other more competent and older doctors in the same rank, climbing up the seniority ladder wasn’t a struggle for him.

One of the medical personnel questioned at a frenzied pace, “Are you sure we’re going to do this, Doc?”

“Of course, I’m confident about this operation,” Clay, the attending emergency physician, said with widened eyes and stretched lips, placing his hands on his waist. “We’ve got to admit the patient right now. We don’t have enough time to spare for decisions. There’s no other way than this.”

The nurse knitted her eyebrows as if she was doubtful about the decision. “Don’t you think this is way too rushed?”

“In that case, should we inform the family waiting outside about this change of decision?” one of the nurses asked as she approached in the patient’s direction and injected the fluid into the tubes plastered on the patient’s arm.

“Of course, and I don’t have to wait for others to tell me what to do when I know it best,” Clay said with confidence as he approached the door, wearing the gowns required for the surgery and heading to the surgery room where a team of surgeons was waiting for the incoming patient.

When he met the team, he nodded, evaluating the situation with Chief Surgeon Diego Salvador, aka Dr. Hawkeye. Despite without saying a word, Clay sighed in relief as he pulled his head down, facing the tiled floors before entering the surgery area. Then, he followed the team behind, standing and grabbing their white latex gloves and performing further preparations. After everyone had geared up, Dr. Hawkeye nodded, signaling Clay and the rest of the team to begin the operation.

With Hawkeye’s leadership, Clay observed the older gentleman performing the procedures with keen eyes while standing beside him. In between, Hawkeye signaled Clay to take over, which permitted him to continue until he closed up the long vertical line of a wound on the patient’s abdomen.

When finished, everyone in the room applauded the success while one of them turned on the lights as, one by one, they stripped off their garments and exited the room.

As Dr. Hawkeye strolled back to his office, Clay walked in strides to catch up with his superior. When the older man noticed the young prolific doctor walking beside him, it didn’t take long for him to smile. “I’m glad the operation was successful.”

“Yeah, me, too,” Clay said, tucking his hands in the pockets of his white gown.

“Because that means the time we spent on the preparations was worth it. And we have a great team.”

Then, Hawkeye stopped and turned, facing Clay. He pressed his hand on the young doctor’s shoulders, squeezing it. “Don’t you realize something?”

“Look. You’ve got outstanding skills as a surgeon, which I could credit to where you came from. When your brother, Rafael, worked with me back then, I saw how he was quite remarkable as well,” Hawkeye said, making Clay pause for a second. When Hawkeye noticed how the young man’s expression shifted, he couldn’t help but sigh. “I’m glad you followed your father’s footsteps. Our country needs doctors like you. We’ve already passed the age where great doctors fly abroad for greener pastures. Despite everything, you insisted that you saved that young man’s life. That’s what counts.”

As soon as Clay heard Hawkeye’s sentiment, he couldn’t help but roll his eyes and let out a sigh of disappointment. He inhaled a deep breath and briefly closed his eyes as if he was carefully searching for the right words to say to him. As much as he wanted to express his dissent, he smiled, knowing no matter what he said, it didn’t mean anything. Because, in his mind, Hawkeye was right. No matter what he does to impress, his family lineage of prominent doctors always gets the credit. Not because he was a skilled doctor alone.

“Thank you for the advice, Hawkeye,” Clay said with an awkward smile. But when he looked away, the look in his eyes changed no matter how he tried to fake them. Even though he had a heavy heart, he felt compelled to defend himself as if it would make him feel better. “Don’t you think this is about me being a skilled doctor?” he said, which got Hawkeye’s attention.

“Of course. Otherwise, I wouldn’t have wanted to work with a young, arrogant bastard like you,” Hawkeye said, chuckling and shaking his head.

“I understand why people could easily think I got here because of being an Elizondo. But you know how I work, and you trusted me with that patient earlier,” Clay paused as he felt more choked while trying to hold back his gushing emotions.

“There’s no other way around, Clay. It is what it is. You have to learn to accept that.”

That idea disturbed Clay, which he reeled until he arrived home in his rented spacious apartment. Though he lived alone and was away from distraction despite living in the middle of the busy urban lifestyle, he knew his family’s influence was loud and powerful enough to meddle in his affairs.

After he walked out of the shower, he noticed his phone rang, so he walked toward it. Before he grabbed the device, he saw his mother’s name on the screen. It made him raise his face to the ceiling and shut his eyes to ease himself. When he flicked his head down, he sighed and gulped while playing tug-of-war with his increasing anxiety. Then, he took the phone and answered the call. “Hi, mom.”

“Clay, we’ll have dinner here tonight. You must come,” she said nonchalantly, which made Clay silent as he walked towards the balcony and observed the busy city life below him.

“Why would I have to come?”

“Of course, you have to come. Your dad wants to see you.”

Dad? “Did the old man miss his prodigal son?” he said with a sarcastic tone.

“Drop this conversation, Clay,” she sputtered.

Yeah, I know you would say that, mom. “He doesn’t need to see me,” Clay said coldly.

“He wants to talk to you. And your brothers want to know how you are.”

He scoffed. “Really? I know they don’t care about me,” he said before releasing an exasperated sigh.

She sighed in despair. “You know, it’s not true, Clay. I know it’s not been that easy for you. However, don’t you think it’s time to let this go? You know, it’s been a long time since I saw you. Don’t you miss mom?”

That made Clay silent again, gulping with unbearable anxiety at this point. Knowing how his mother has been patient with him since he left their family home, he couldn’t help but feel sorry for her. In his mind, she was an admirable woman who managed to keep her head up despite the chaotic home she was leading. “Mom?”

“How are you?” Clay asked with concern.

“Why don’t we talk about it when you come? I’ll be happy if I see you tonight.”

Despite Clay’s inhibitions, he nodded. “Okay,” he said and hung up.

After he did, he planted his elbows on the rails, leaning forward and facing down. When he raised his face, he saw the vast sunset. Even though it was magnificent to see how streaks of orange and blue weaved the skies, his mind struggled to perfectly reconcile the gloom in his heart as to how he felt at this moment.

His chest tightened as anxiety and frustration swelled in his being. It was uncomfortable that all he could do was sigh before turning, heading back to his room, and closing the door.

Thank you so much for spending time reading this chapter. I hope you enjoyed it as much as I did when I wrote this part three months ago. This chapter, in particular, reminded me of those times when I sat before my desk, seemingly prepared to type in words, but I struggled to keep it up.

It took an external motivation to get it through, and, at that time, the NaNoWriMo event was upcoming. At that time, I thought, “This could be a great opportunity to try and give this a shot one more time. You’d done an excellent job with ‘The Rival,’ so you could do it, Mecyll.”

You know, it’s easier said than done because writing a chapter with a clear intent to finish it requires more than just a skill. Since I started writing fiction, I realized how much this work demands my ability to be naked and the guarantees to answer whether I was mentally, emotionally, and spiritually prepared to face my fears, conscious or unconscious.

So, being able to write this down meant I managed despite the countless times dancing around with depression and enjoying the roller coaster rides my anxiety provided me.

This is why I don’t know how I could thank you for your support, regardless of the scale or contribution size, from sharing my work with others or buying my books. It doesn’t matter because, for me, every small act you show is appreciated.

Again, thank you, and have a great day!

If you like to support my writing life, here’s what you can do: 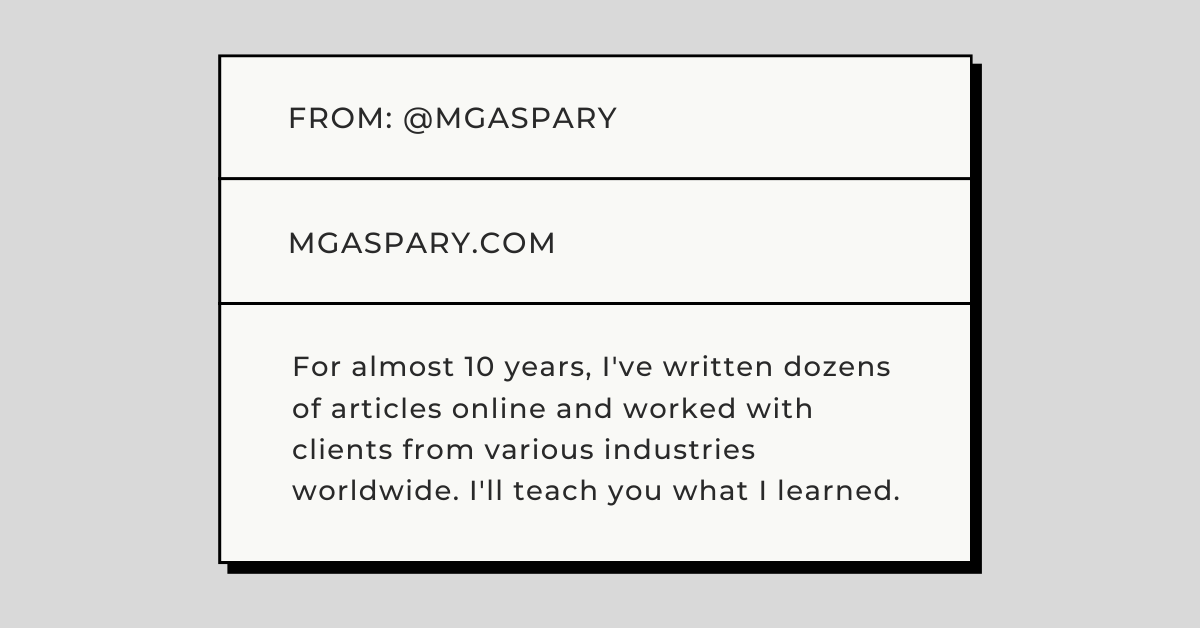 Hey! I’m building an eBook library to house all the downloads I’ll feature on the website, such as free templates, PDFs, eBooks, etc.(depending on availability). If interested, sign up below for your special early access. Be the first to know when a new title is up.

This site uses Akismet to reduce spam. Learn how your comment data is processed.

Attention: Manage Your Consent
We use cookies to optimize our website and our service.
Manage options Manage services Manage vendors Read more about these purposes
View preferences
{title} {title} {title}
%d bloggers like this: